Last week I was just too lazy to post a work in progress. Friday, I had a finished object, I just didn't get home until at least 10:30, so I couldn't share it! :( I'm not entirely happy with it, but I'll post it and you guys can tell me what you think. That's what happens when I buy yarn on impulse. :P 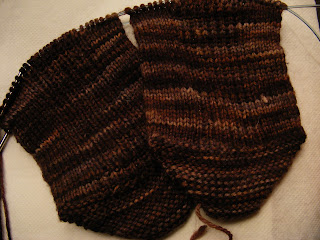 I have been working casually on a pair of socks for John. It's really the only project I have that can be carried around and worked mindlessly on the bus. They are called Garter Toes and I really like how they are knitting up. I'll admit that this yarn was an impulse buy, too, but I knew the yarn would become socks for John. I'll explain better in the FO post when I finish them, but it may be enough to say that the colorway is Dexter-inspired and came with Dexter-inspired stitch markers. How could I not buy that yarn?!

I'm also still working on the entire pile of WIPs from a few weeks ago, but I'll have to start keeping it hush-hush because I post my blog posts to Facebook, where one family member might see her Christmas present. I promise to share post-receipt. I can probably also show you my grandma's Willoughby Scarf because she is not on Facebook. :) I'm half-way through and it looks really pretty! I keep thinking it could be longer, but then I remind myself that every time I think that, I end up with a scarf as long as a football field....Again, I'm too lazy to share a picture. Fall is so terrible as far as motivation goes. 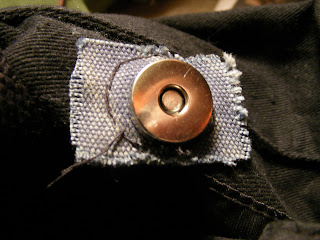 However! I did do away with my needs-to-be-sewn-up pile in a fit of homely inspiration. I patched an arm-pit hole in a sweater I wore once (store-bought), the side seam in an abused pair of undies, a belt loop in a pair of tight jeans (belt loops are just so helpful pulling pants on! and so hard to sew back on!), patched a hole in John's pants pocket, and fixed my $10 Walmart bag's awesome magnetic clasp. The clasp was hanging by a thread, so I snipped a bit of canvas from my high school backpack and patched it back in. I feel so smart! I'm not sewing savvy in the least. As you can see from the photo, I sewed in a circle around the clasp instead of around the edges of the canvas. That is as good a demonstration of my skill as any. I hope all my repair work holds. :S

For more WIP Wednesday posts, visit Tami!
Posted by Ness at 10:00 AM

Thank you for reading and commenting! I love to hear what's on your mind!