Told You it was a Quick Hat

I promised you a hat and this time I'm delivering on my blog promise. :) 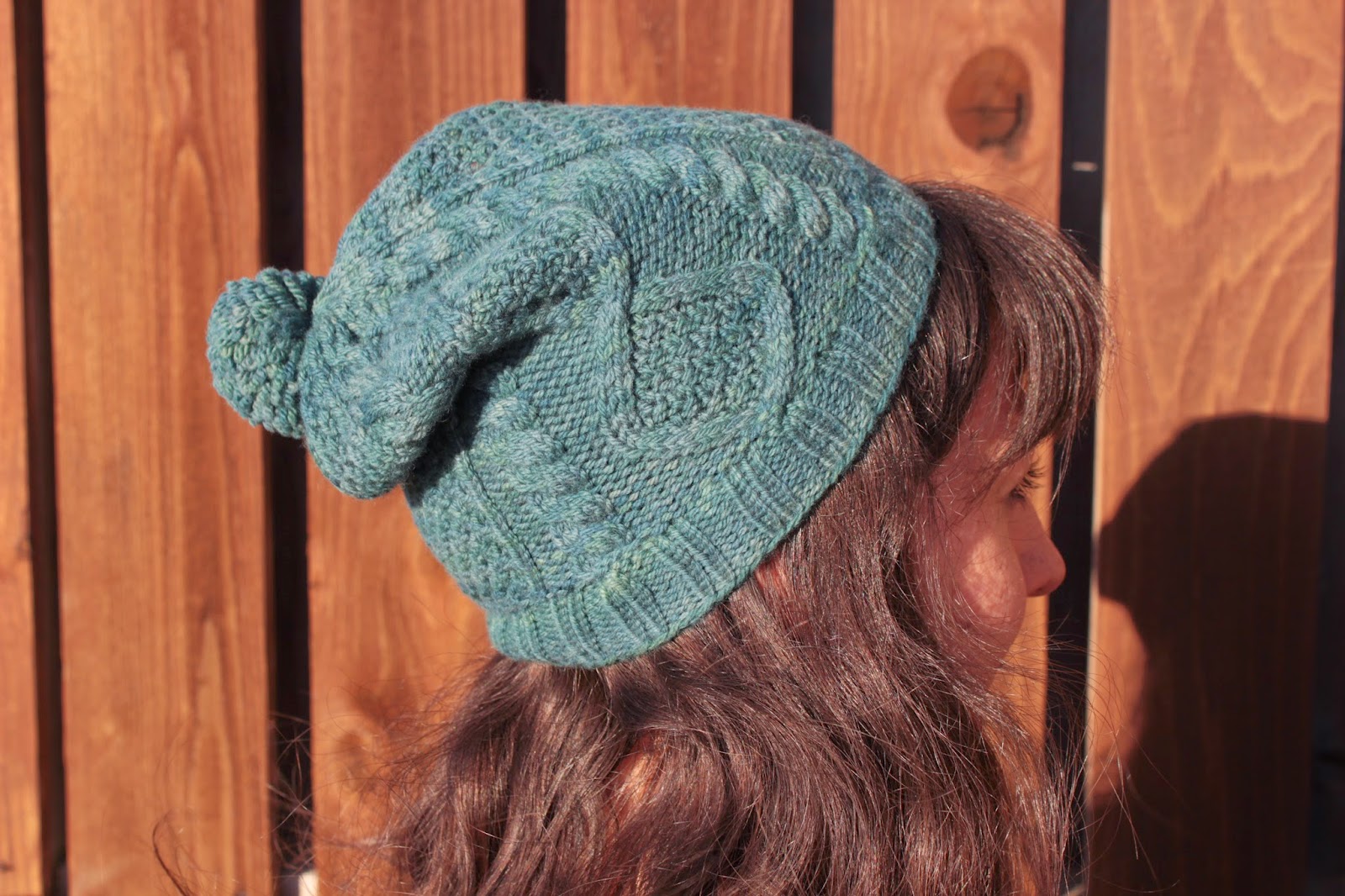 I knit this hat in 2 days! It was easy and fun, something I haven't had in a knitting project for at least a month, haha. I had the amazing luck of winning the ebook during Very Shannon's Summer Sweater KAL (during which I managed to finish zero sweaters :P). There are a lot of really fantastic patterns in the book. This one looked like it would provide me with instant gratification and I was not disappointed. 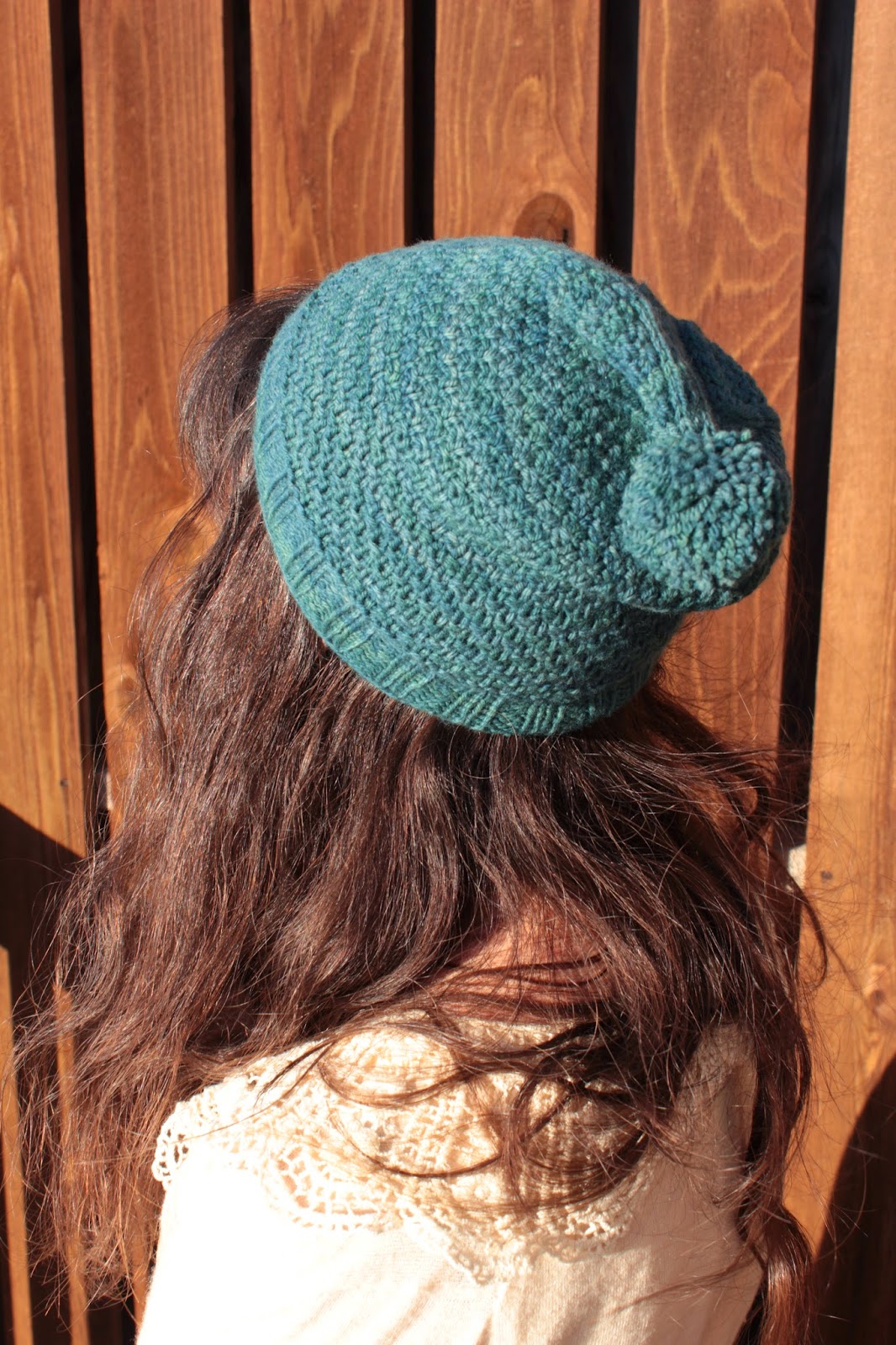 I could have made it a size larger, I suppose, but I don't think I'll have to worry about it falling off my head at the size it is now. I do wish it were a touch longer because I love my hats super slouchy, but it's cute. The yarn is an odd skein that didn't match the dye lot of the three others I used to make Jules recently. It really did a number on my fingers. They were so blue from the dye that they looked bruised! For as soft as Swans Island is, I'm not sure I love it enough to put up with the blues bleeding on me that much again (this was the third go-'round). It rinses out in a snap and I haven't noticed it leaving any other traces around since the wash, so it's fine now, I hope.

Happy Halloween! John's been comping for the last couple weeks, so we haven't carved our pumpkins (yet). We're hoping for a chill night getting those pumpkins carved while watching a (not scary:P) movie. :) I dressed up because my students insisted. I don't have any costumes, so I improvised: 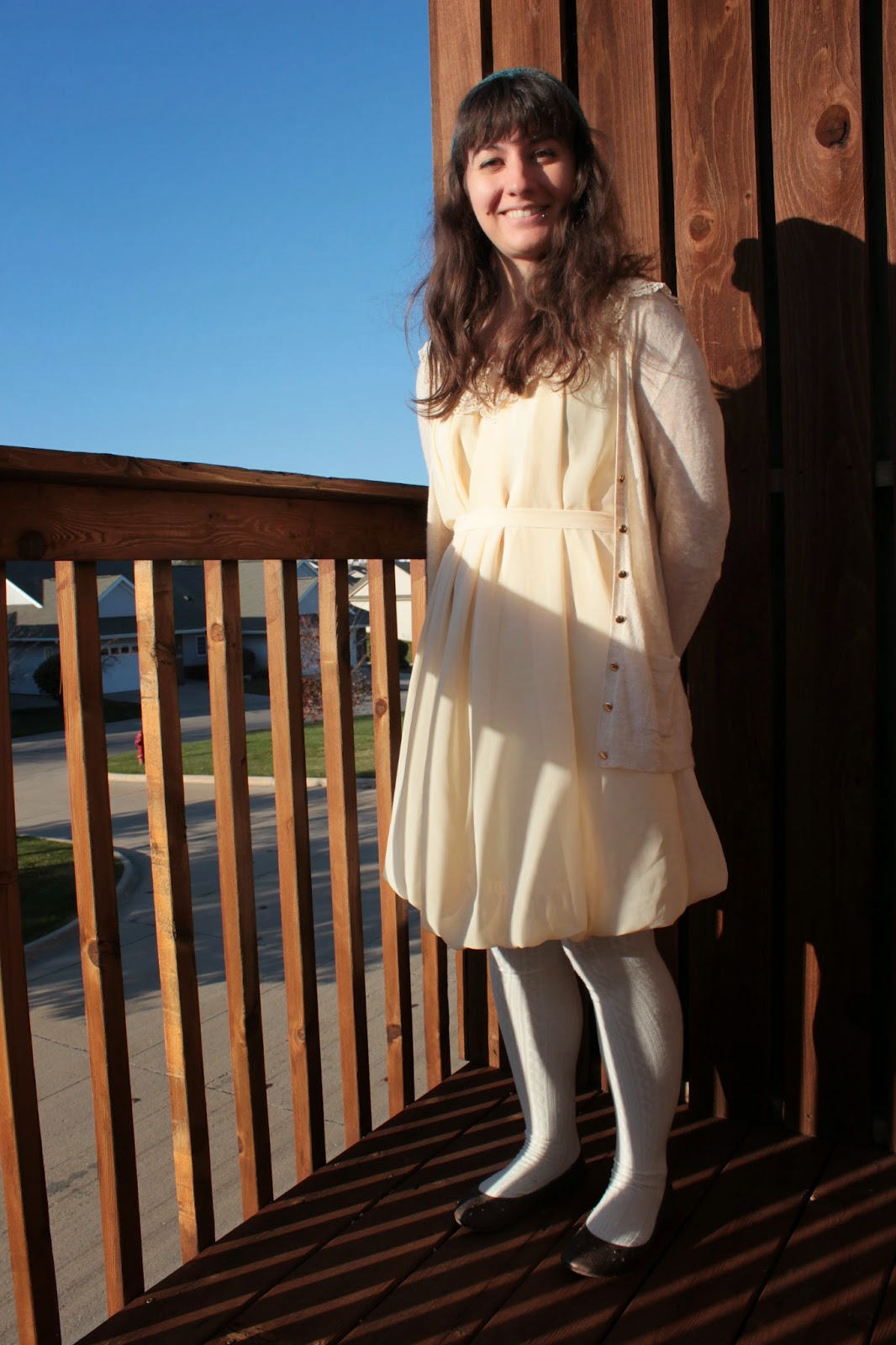 I'm a ghost! I guess. :) John said maybe the ghost from The Ring, but he thought I was stretching it. I was, haha. Have a great weekend! See you Monday!
Posted by Ness at 5:39 PM 4 comments:

I started a hat on Monday. I feel like I haven't started anything new for ever, but I think it was just last week I started a pair of socks. Really, I haven't finished anything in forever. The hat is going quickly enough that it should be done by the end of the week. I like small projects!

A couple of pictures of the hat and socks (that aren't much larger than they were last week :S): 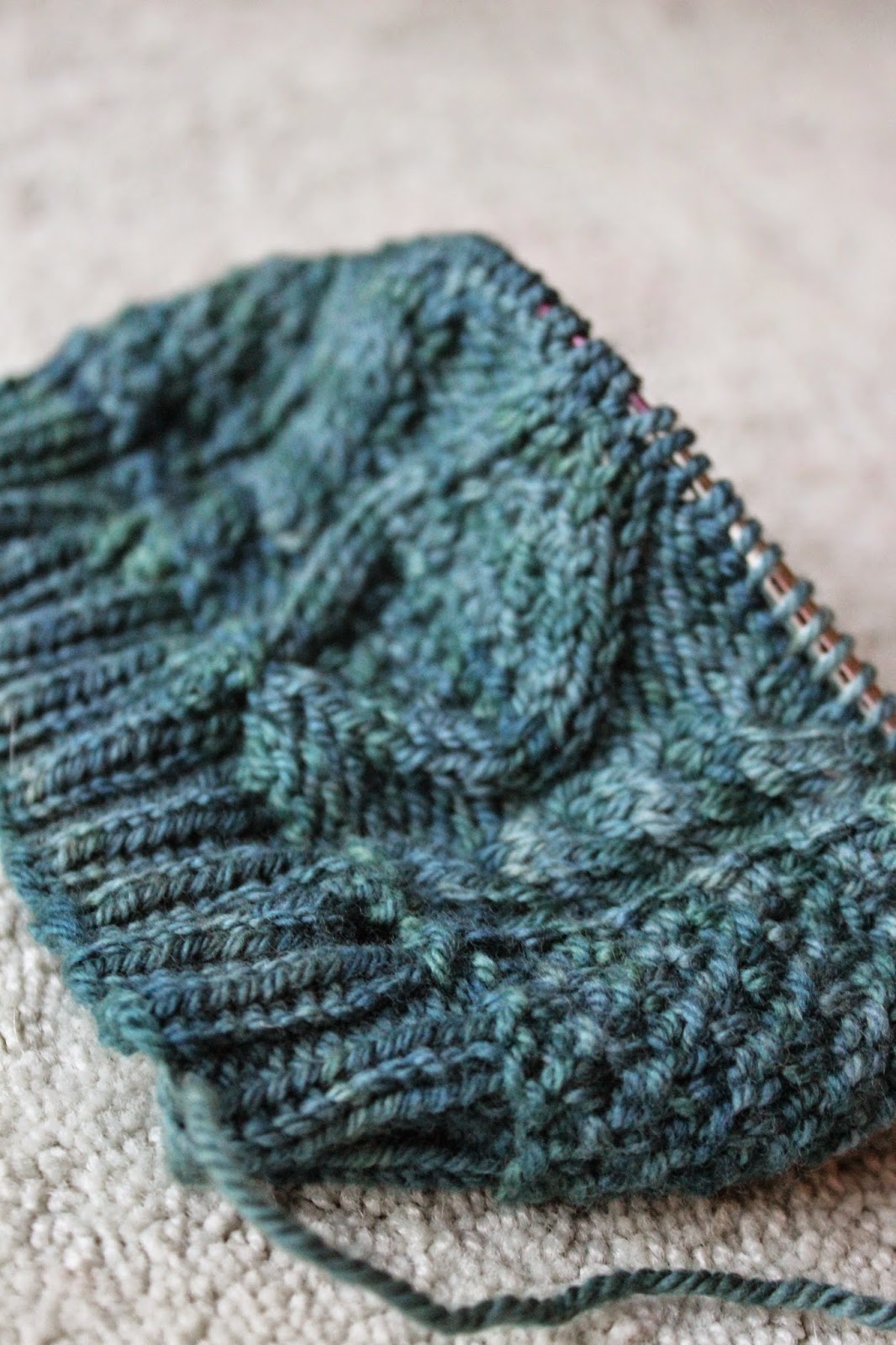 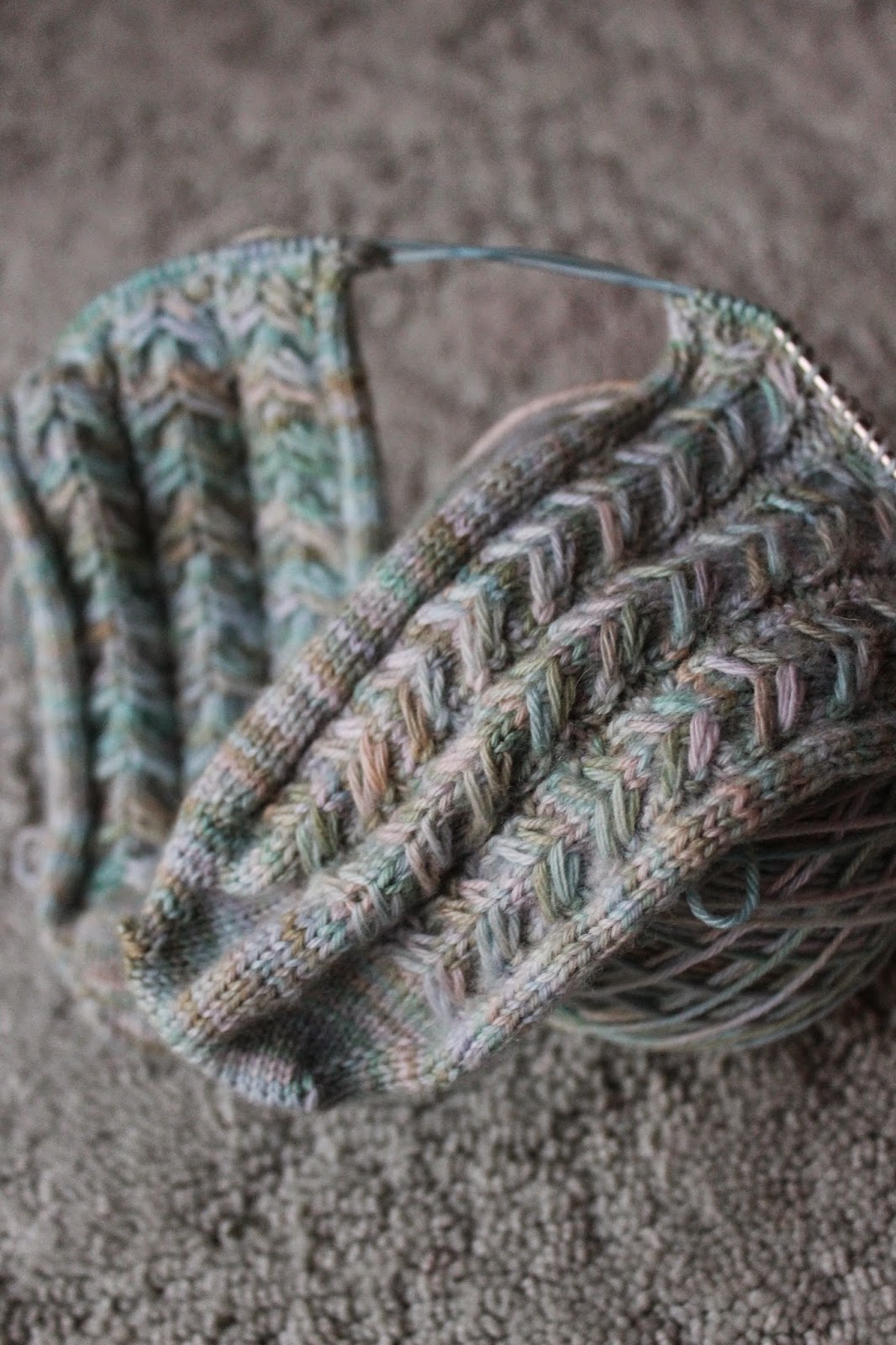 And that's all I've got for you today. I scheduled too much for class tomorrow and didn't get started on prepping it soon enough, so I've got a lot of lesson planning to do tonight! Hat for you Friday? Deal. Or, if time magically slows down (I know it will, but not before Friday ;)), maybe I'll finally get John in his smashing new cabled sweater. :)
Posted by Ness at 9:00 PM 6 comments:

This is a type of post I've never ventured, but I'd love to know what you think about the subject. My aunt and I love scary movies, so we saw two this weekend while I was visiting family. We thought that neither of them was scary (we are very difficult to scare), but they weren't bad. We disagreed about which was the better movie, but couldn't quite put our finger on what we thought was good and bad about each of them.

After the second movie, I turned on the tv and happened to catch the tail end of a special on Turner Classic Movies with Stephen King, in which he discussed his own experiences of movies based on his books and general trends and feelings towards scary movies these days. He touched on what I think bothers my aunt and I most about modern scary movies. He talked about how gore changed horror. We became too reliant on it--and now on jump scares--to terrify us.

The special effects of horror (and other genres of) movies take over and the stories themselves take a less important role. The really good horror movies are the ones that have a great story and some Paranormal Activity and The Blair Witch Project. Great movies! Paranormal Activity does rely heavily on jump scares, but the effects really support the story instead of the other way around.
element of the unknown. Those movies where you never see the monster or ghost or you have no idea how to stop whatever is terrorizing the people on the screen are the really great movies. Think about the low-fi movies like

The original Evil Dead still frightens me, despite its awful, awful effects. The story is just phenomenal. I can't bring myself to watch the new one (though I did catch the last terrible few minutes of it last week) because I know the story just doesn't exist in it anymore.

Horror movies are too quick to resolve themselves these days and they're usually terribly predictable. I can't understand why people don't like them. My aunt is the only person who will watch a horror movie with me. They aren't scary! They aren't even substantial in the plot department! I want to be scared. It's a healthy emotion that I need to draw out every once in a while but I can't usually find anything to do that for me, so I'm on a constant search. So I'm curious: if you don't watch horror movies, why not? If you do, why do you watch them?


P.S. If you are like me and seek the thrill of a good scare but can't find it in movies, read some books! Stephen King's older works are delightfully frightening (though long) and there are many other scary books out there like House of Leaves by Mark Z. Danielewski, which I could only read in broad daylight. Any other scary book suggestions?
Posted by Ness at 4:21 PM 4 comments:

Last week kinda got away from me. I have the finished knits, though! Have knits, will share. :) I've sort of lost my knitting mojo recently. It makes me sad. I don't know if it's just because I've got a lot to do around this (midterm) time, if it's because I have a mind full of things I want and need to do, or if after 7 years my maniacal knitting speed has just finally caught up with me and I need a break. The overwhelming number of works-in-progress certainly hasn't helped. :S I'm working on it very slowly. :) 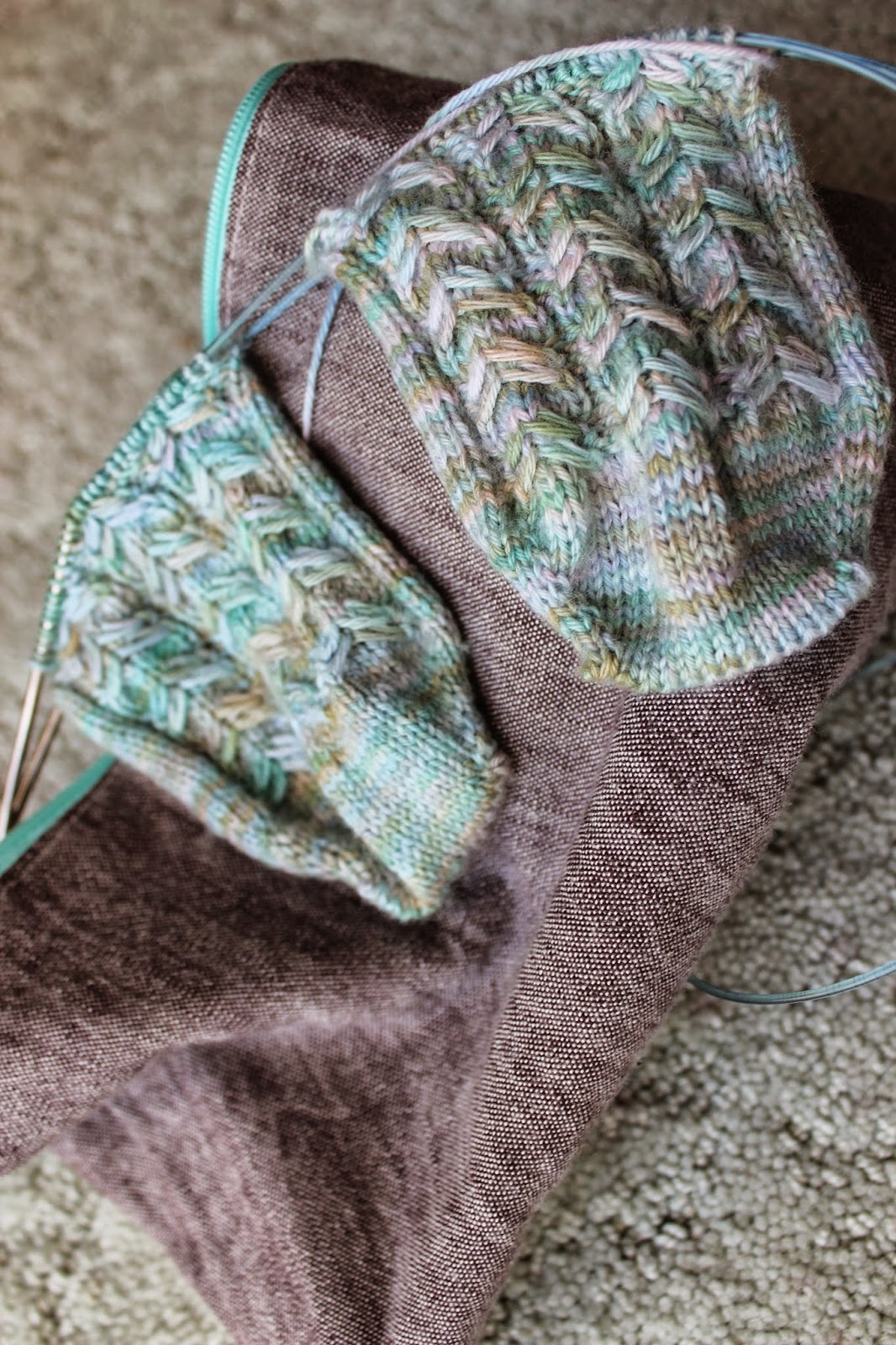 I started these socks over the weekend, hoping that my love of the yarn would jump-start my mojo again. It didn't work as well as I had hoped, but I am knitting and mostly on them, so that's a start.

And for a promised FO: a little black bunny. Nothing terribly special, just a fun little yarn-eater that we had way too much fun photographing! 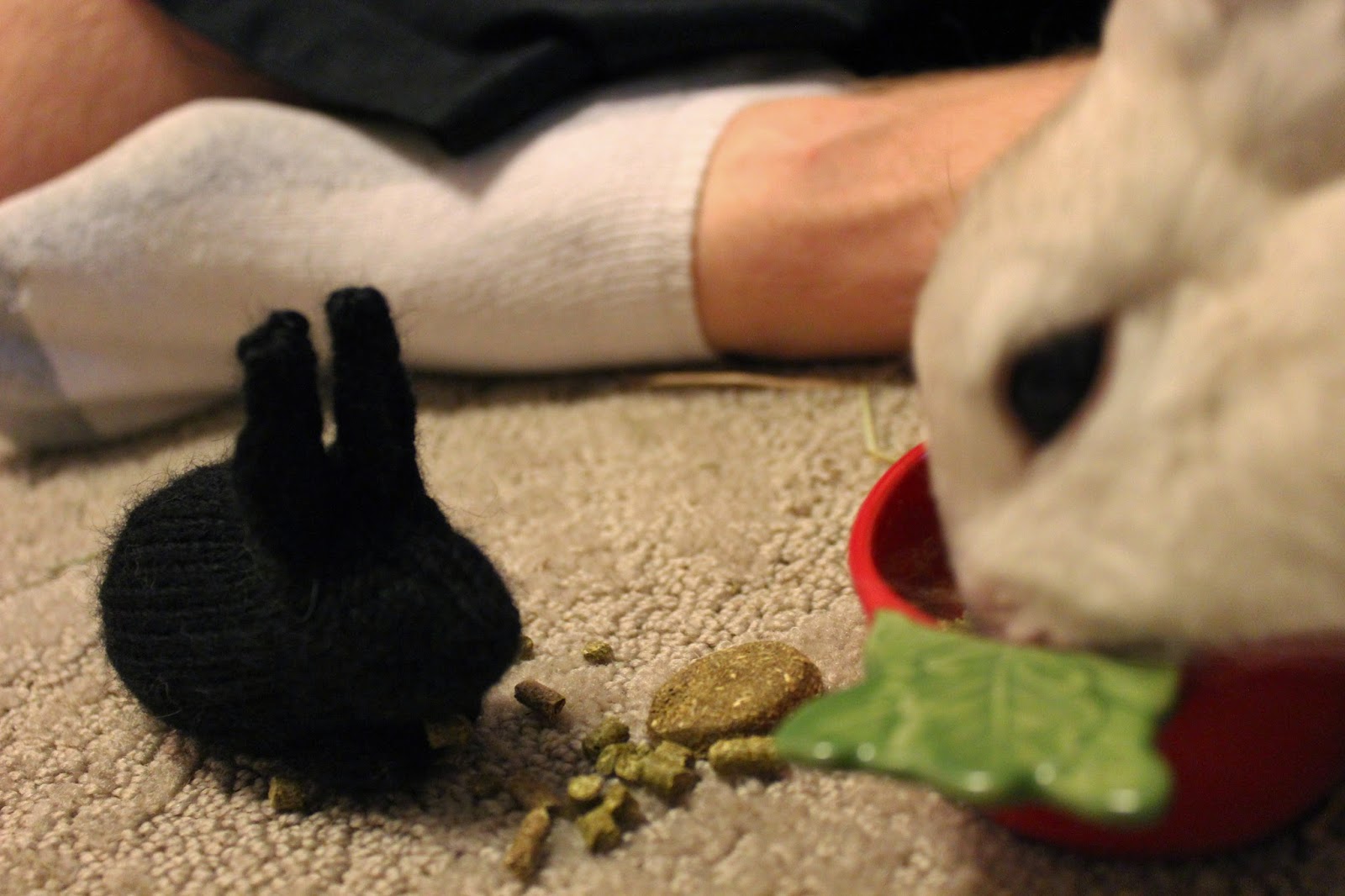 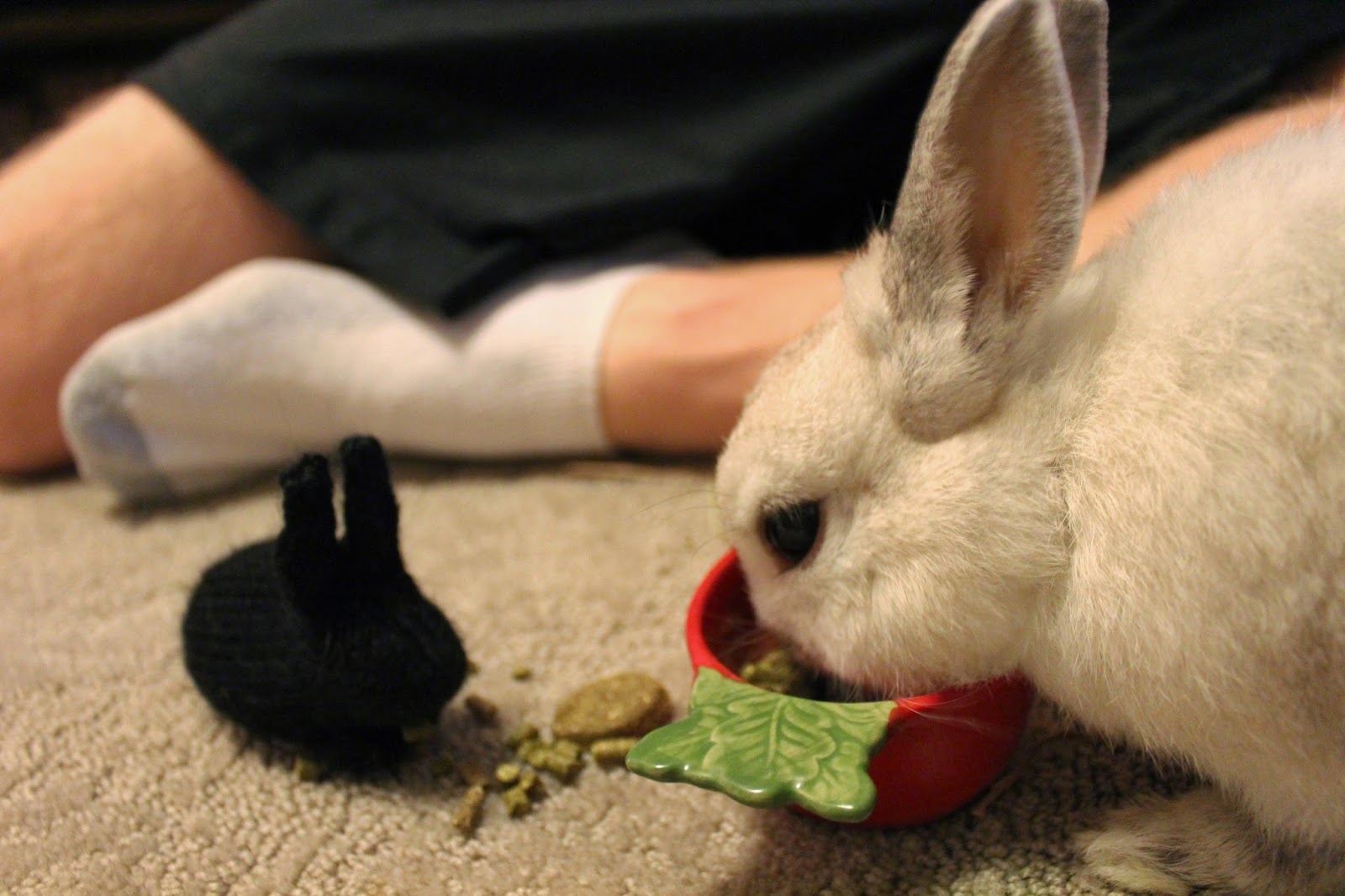 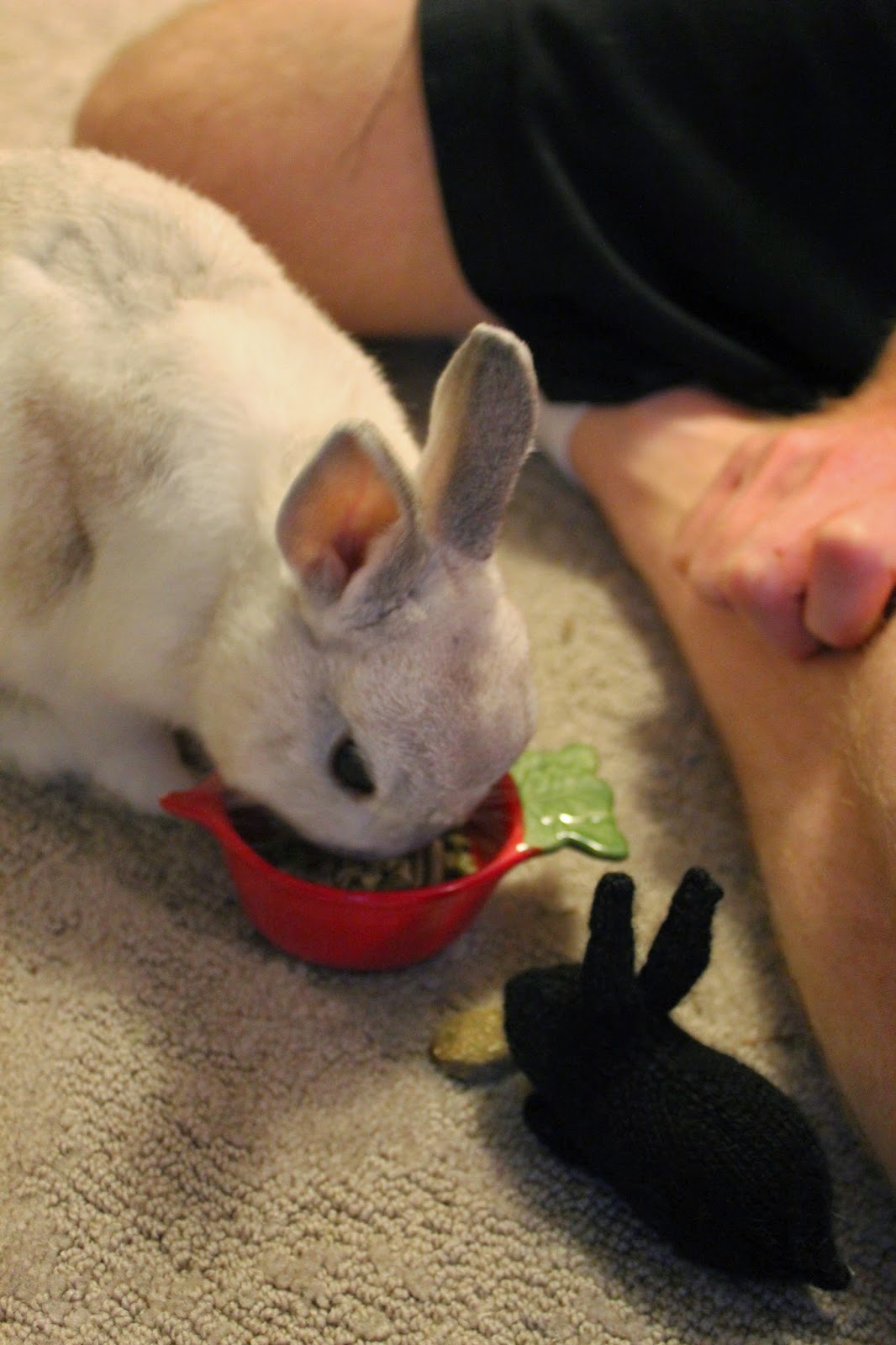 Ophelia doesn't like him. Who can blame her? He's eating her food!

I hope you guys have a fabulous week and I'll try to get pictures of John's fabulous new sweater before Friday so you can see it then. See you soon!

All right! Enough! I'm going to make up for my ridiculous, repeated failures to post FOs by giving you one today, one Wednesday, and one Friday. Then, I promise not to drop the ball again! First up, a fella I finished in June and mounted in July: 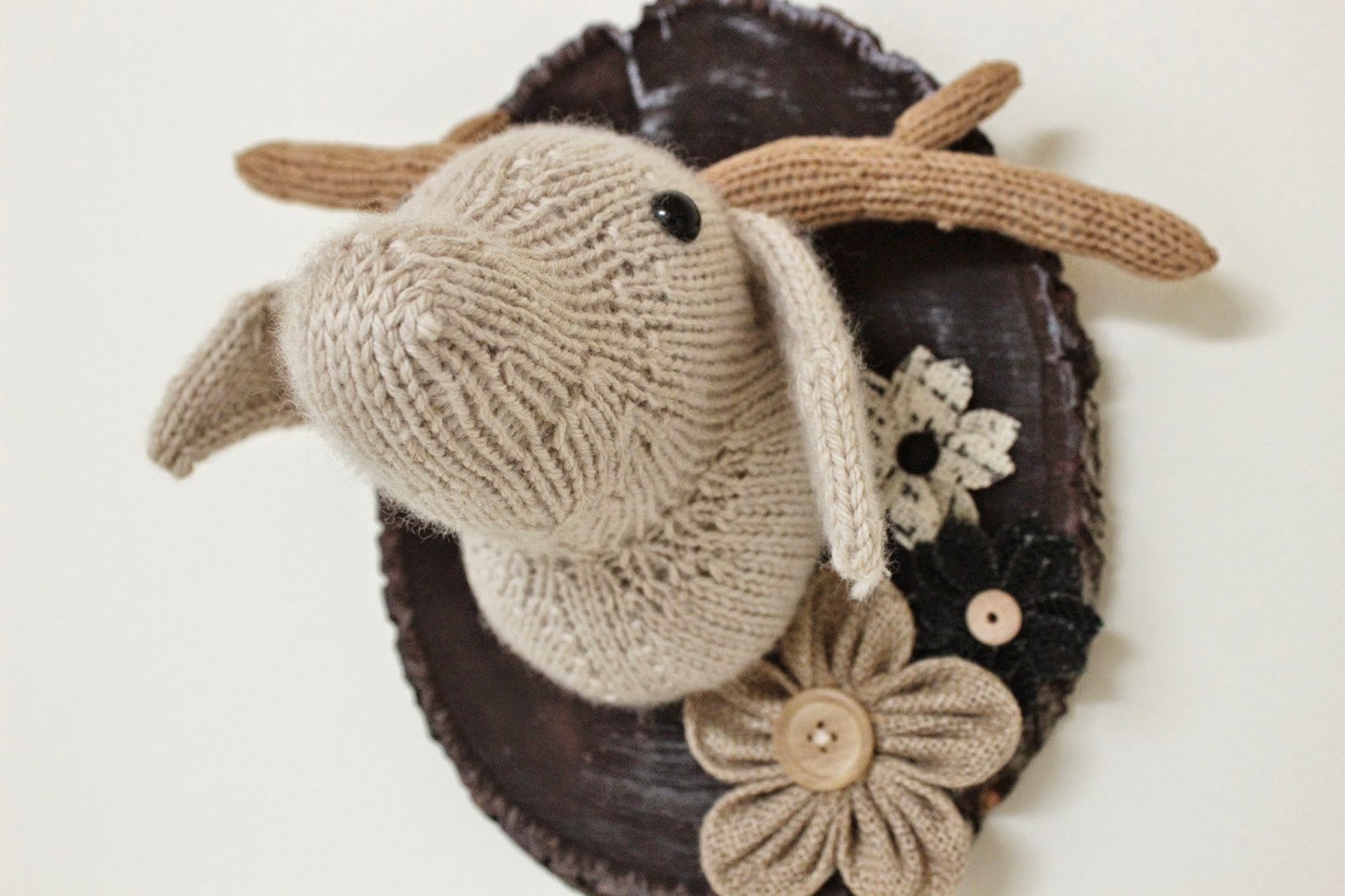 Isn't he just the cutest! One of my aunts got married over the summer to an avid hunter. He has at least four deer heads hanging in his basement and I thought my aunt might appreciate having a prettier deer of her own hanging in the house when she moved into the man cave. :) 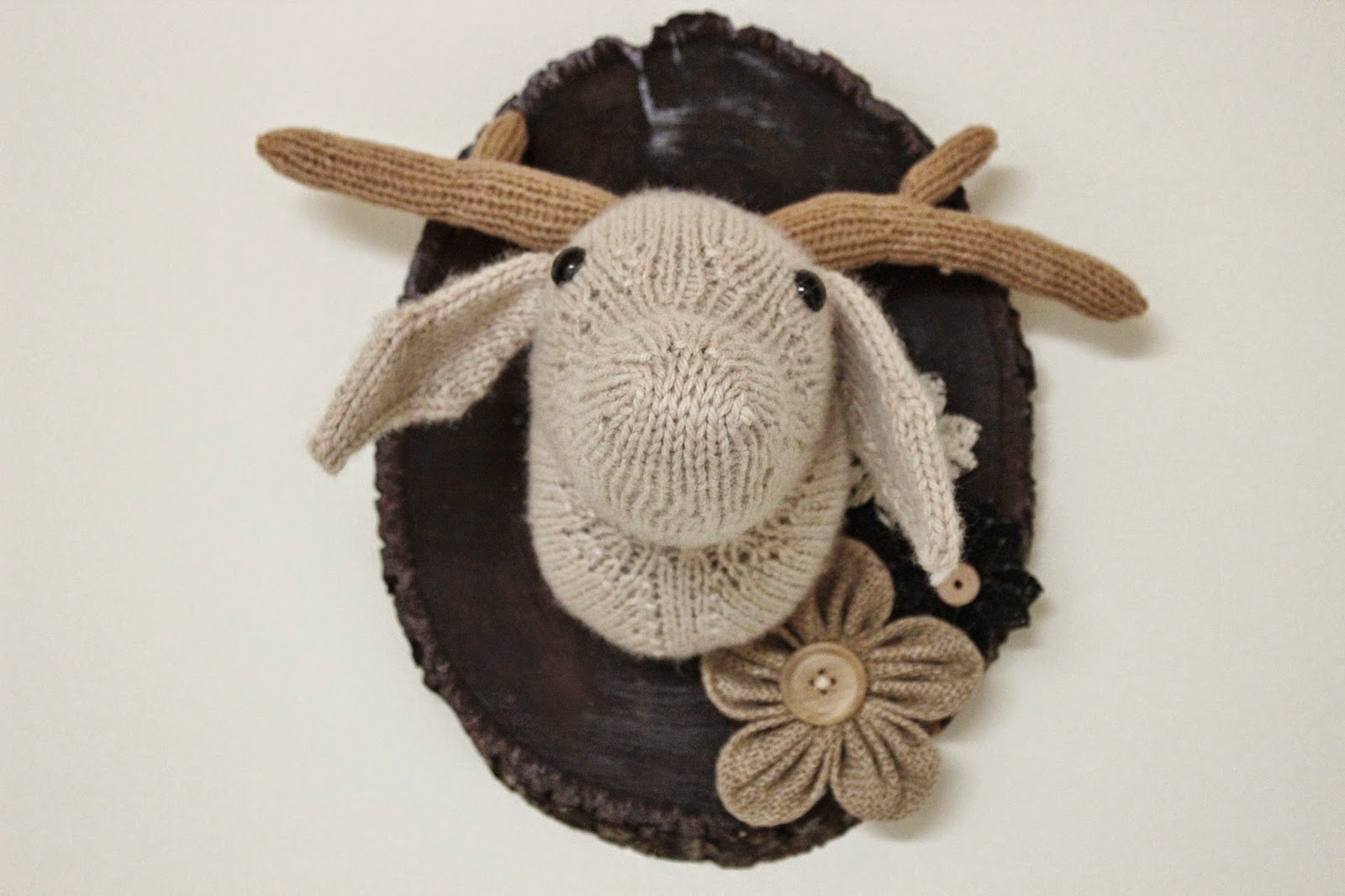 The pattern is great! The yarns I used were probably not the best choices, but they turned out just fine. I was more concerned with the colors and what I had in my leftovers bin than fiber content. I washed the head on hot in hopes of a tiny bit of felting and I think I achieved enough to give its head a slightly firmer shape. 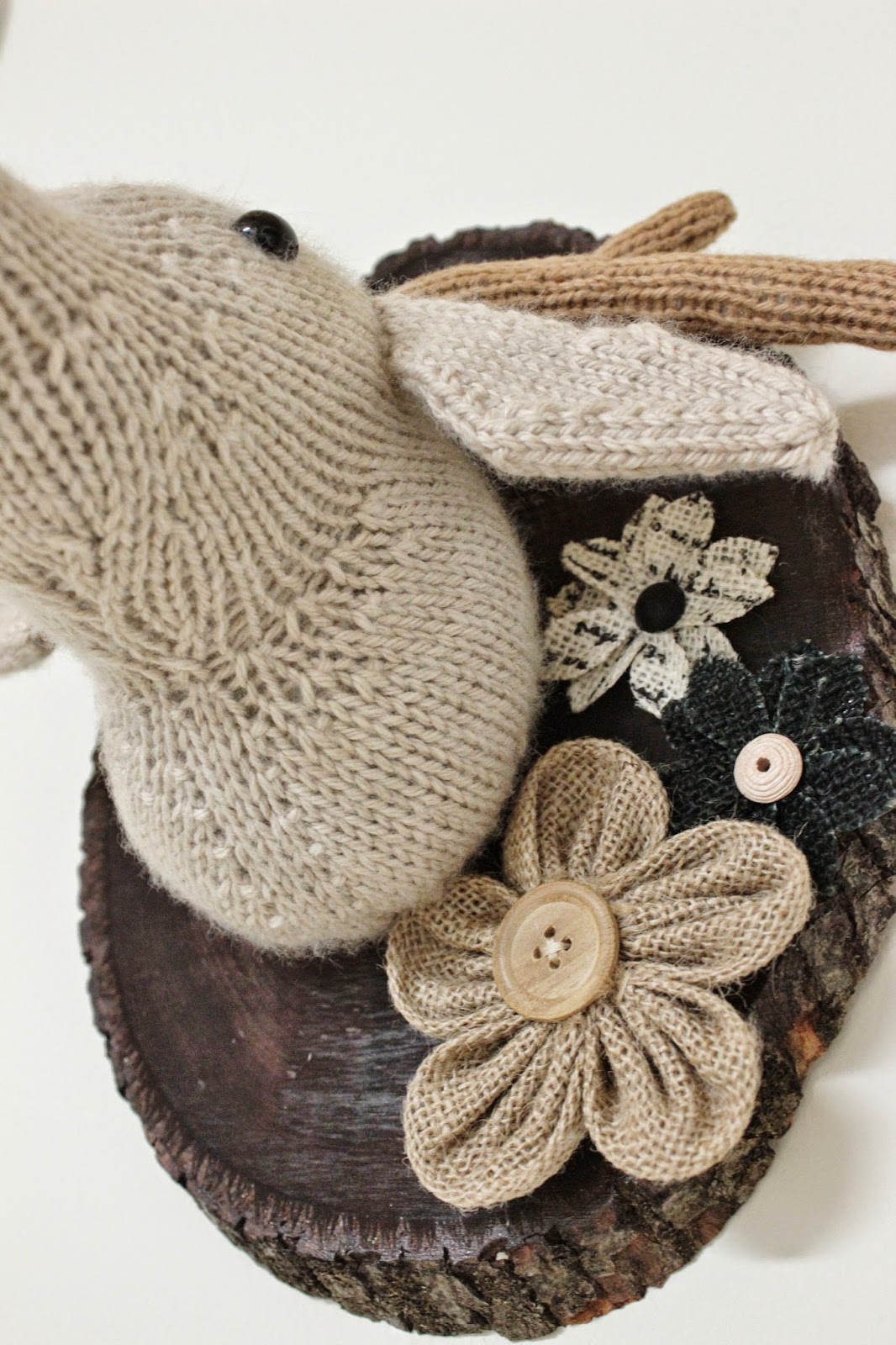 The antlers were awfully fiddly and probably needed wire to make them more stable, but they'll do! I stained the mount and bought the flowers to glue on. I think he looks very chic. ;)
Posted by Ness at 4:43 PM 12 comments:

John and I took a three-day weekend trip to Minneapolis this weekend (hence the lack of an FO Friday post AGAIN :P). It was a tad chilly for my tastes, but beautiful, nonetheless. 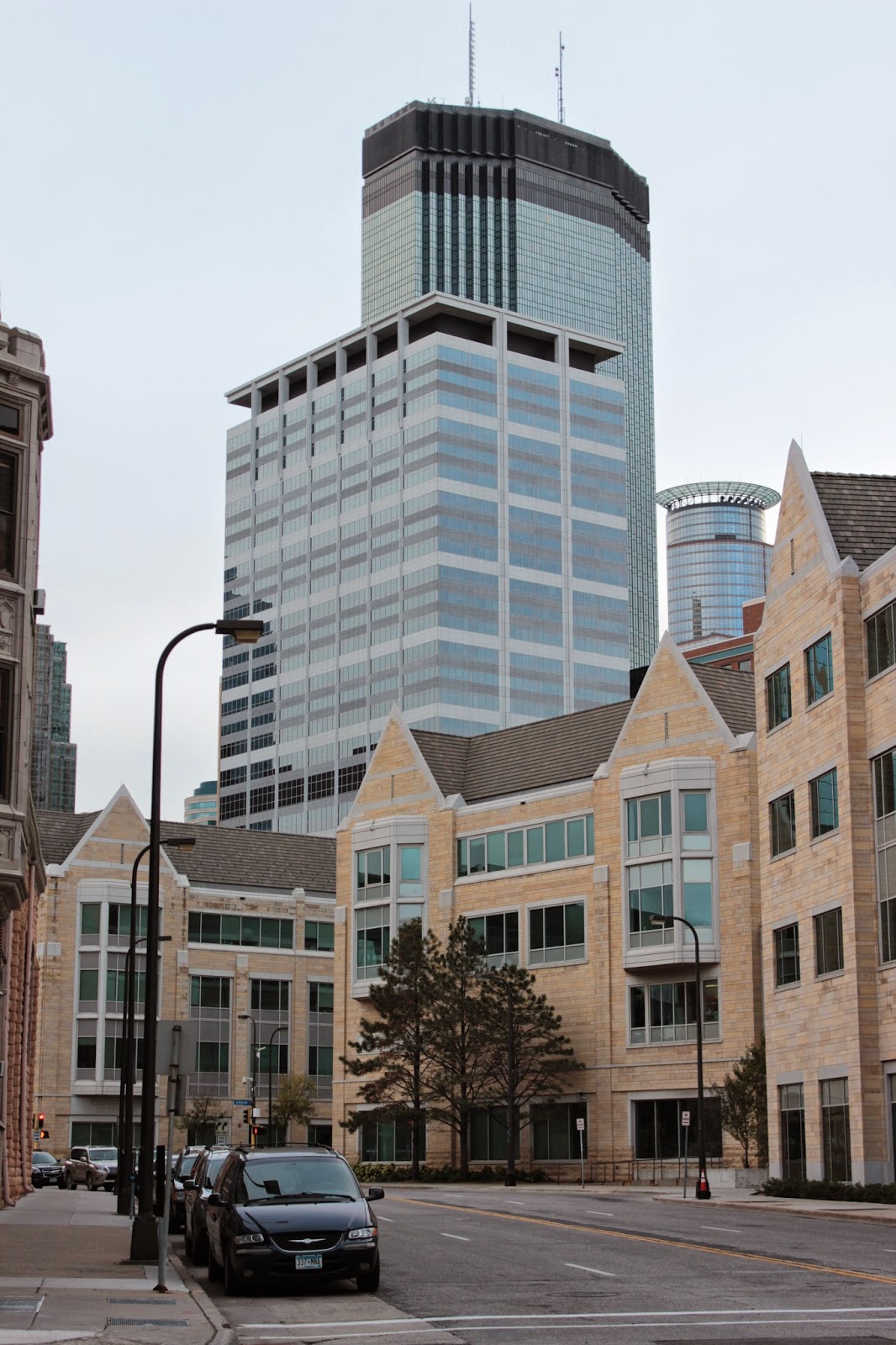 We aren't terribly cultured, so we ate fast food and our big outing was to the Mall of America, but we enjoyed the sites we saw along the way. I did stop (on the way to the Mall) at StephenBe's Yarn Studio. It is really a great shop, especially if you like bright yarns. :) I picked up some yarn for a hat for my little brother. 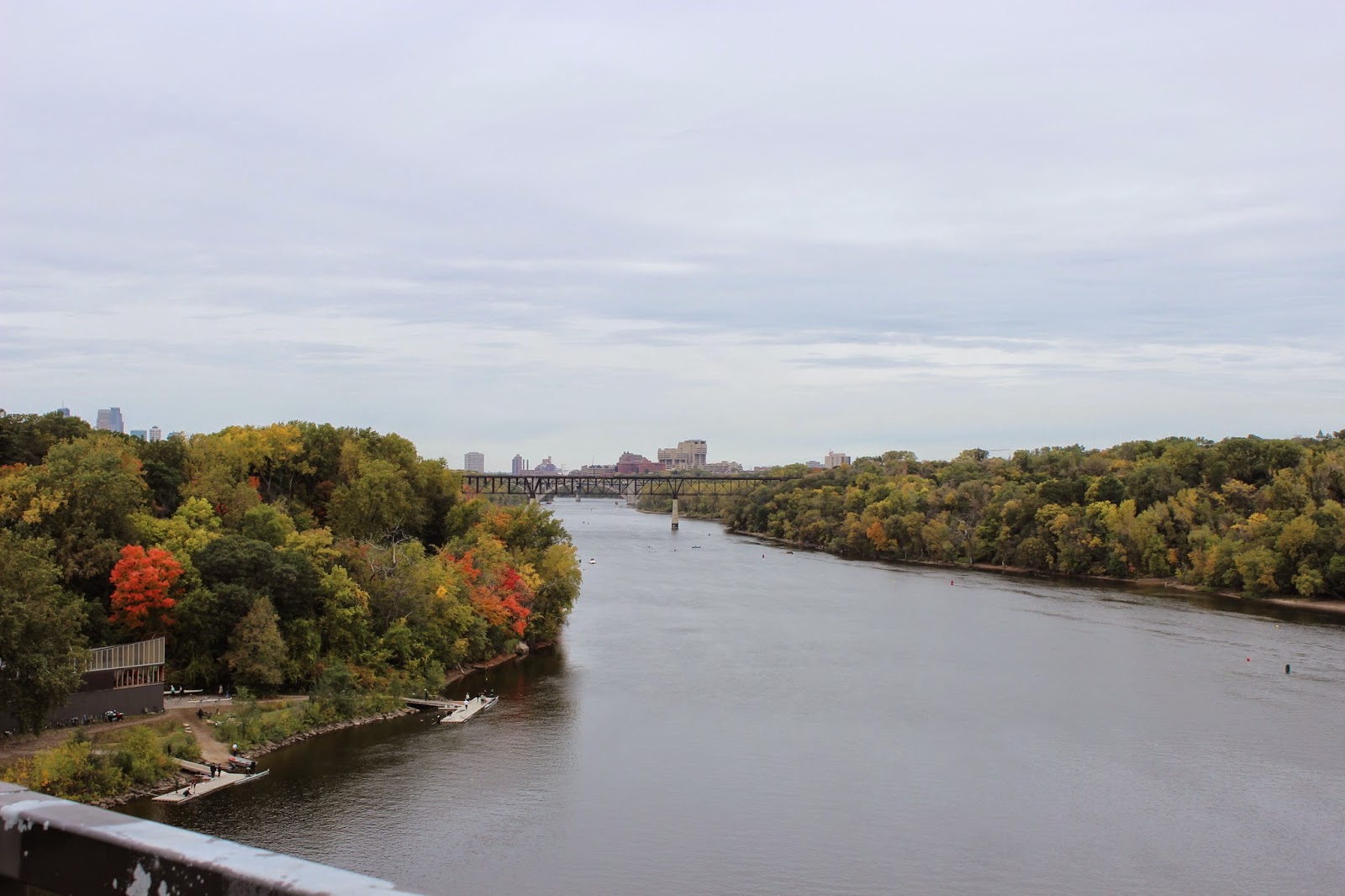 We were there for the Twin Cities Marathon. I've never spectated so hard in my life! Most marathons are a large circle, but this one winds its way around Minneapolis and ends in St. Paul, so driving, parking, and walking/running to the course to see him was real a bear compared to other races. John did extremely well, though. I couldn't be prouder of him. :) 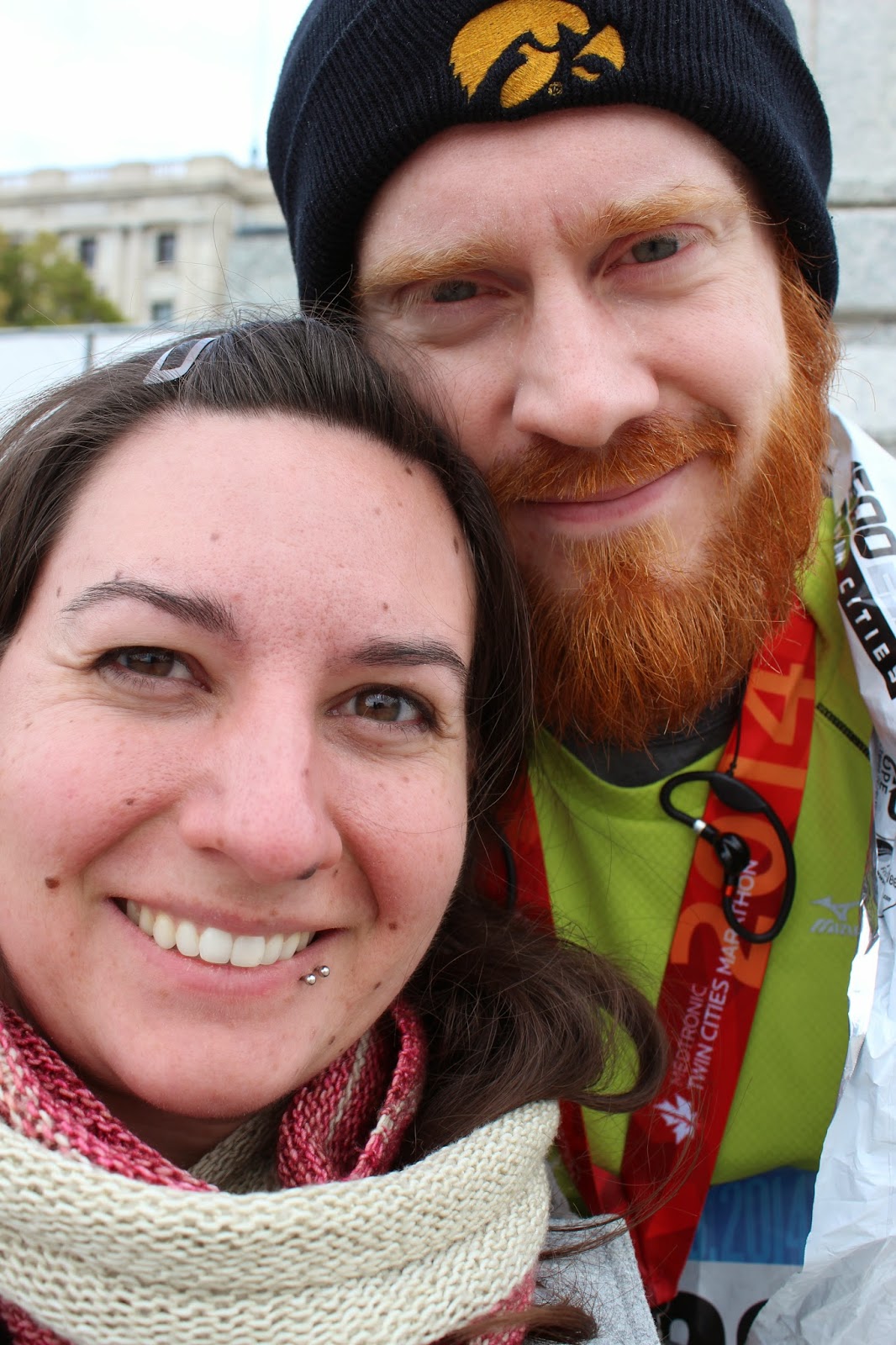 We had a great time, but we missed our bunnies! It's good to be home.
Posted by Ness at 4:40 PM 2 comments:

I did what I said I was determined not to do last week: fell off the face of the earth. Friday ate me all up. I had a conference proposal that needed submitting and with a bunch of extraneous noise from the window and just outside my office door (everyone thought it would be a great place to chat Friday!), it took me about three times as long to do it. :P THERE WILL BE AN FO THIS FRIDAY! I swear it! I'll write it up tonight, in fact! It's been way too long.

In other news, this sucker is damn near finished. I got to where I thought I'd finish and decided it needed 28 more rows. Then there will be fringe and it will be the greatest shawl I have ever knitted! I'm so excited! 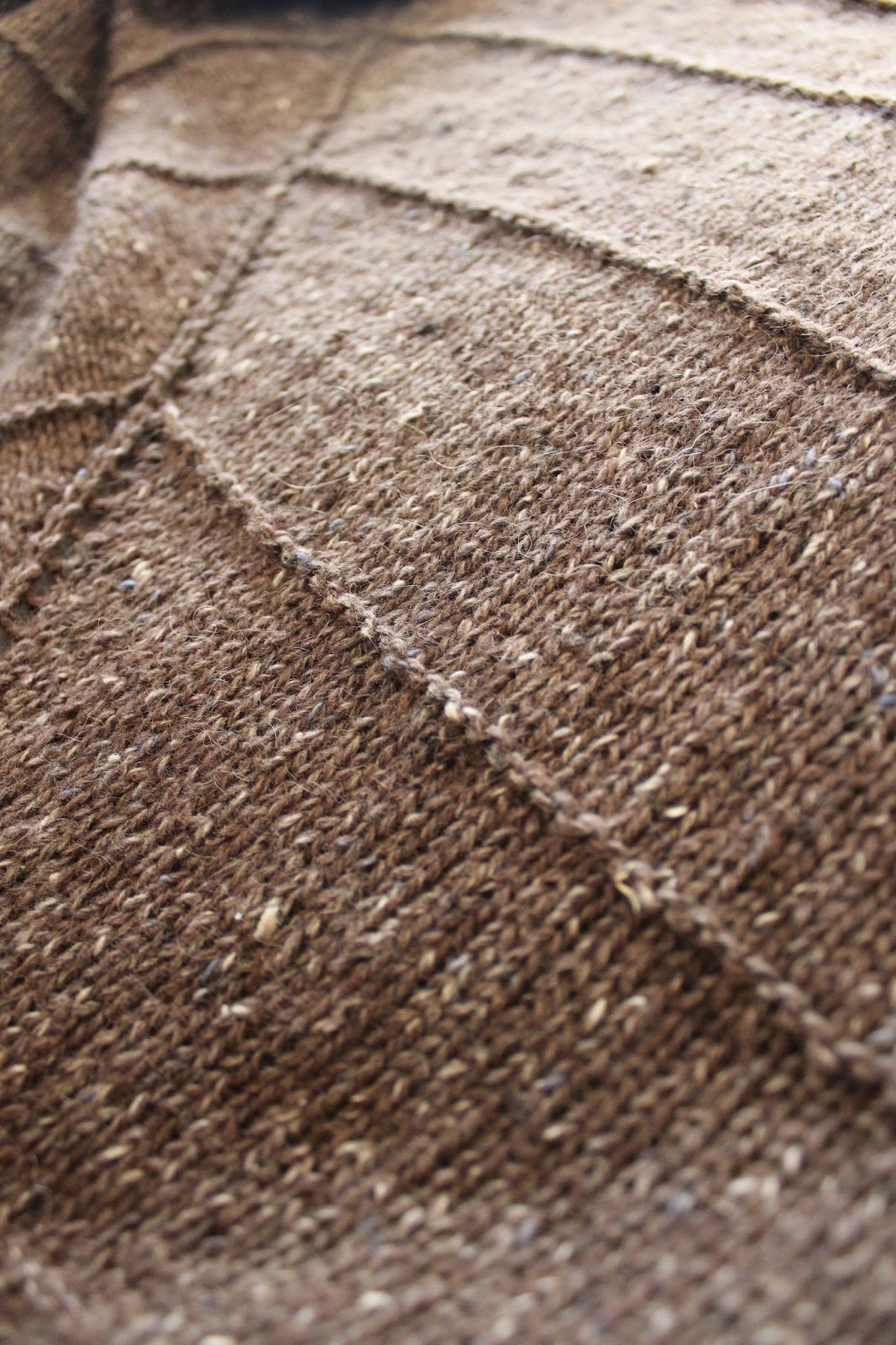 Check out the incredible autumn light, too. So pretty....I jumped the gun rejoicing fall's arrival a couple weeks ago. We had an 80-degree weekend last weekend. Today has the nice, crisp autumn feel in the air. I drove through some falling leaves last night that made my heart pitter-pat. :) I've been riding my bike all over town, too. The weather has been absolutely perfect for such a ride. It's just too miserable in the summer.

What have you been up to? Any fall outings planned? Are the colors changing where you live?
Posted by Ness at 9:00 AM 12 comments: